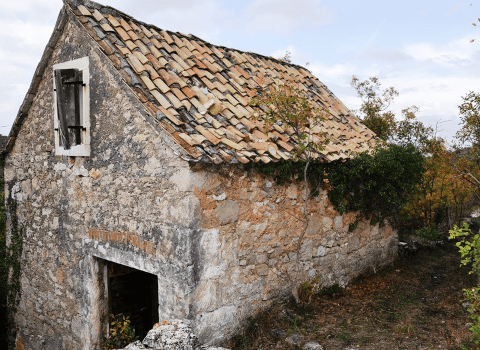 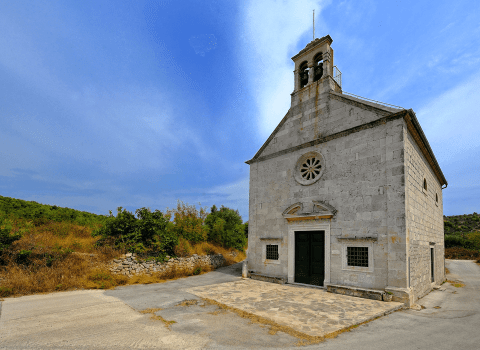 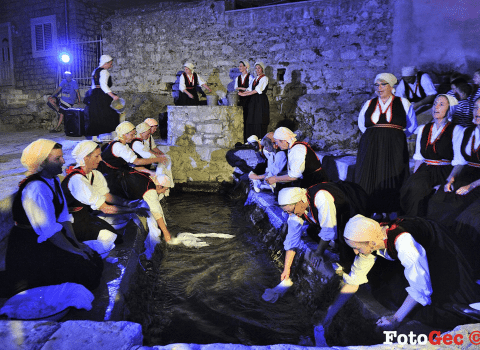 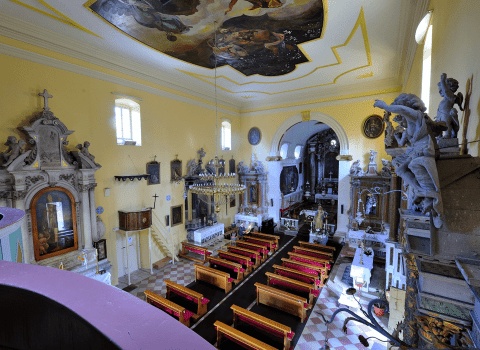 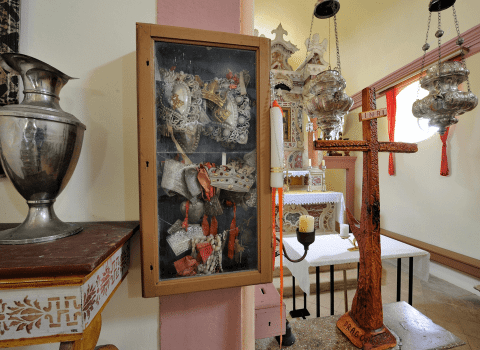 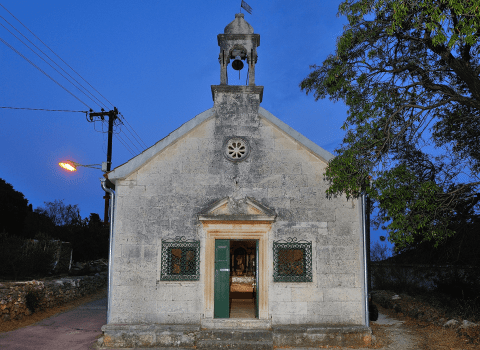 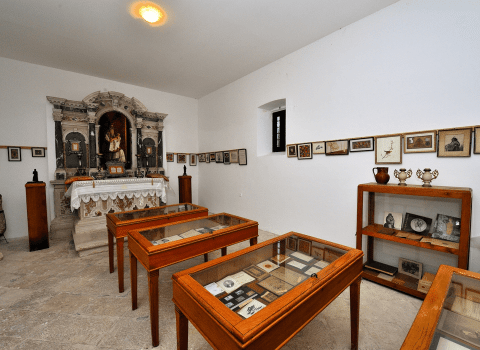 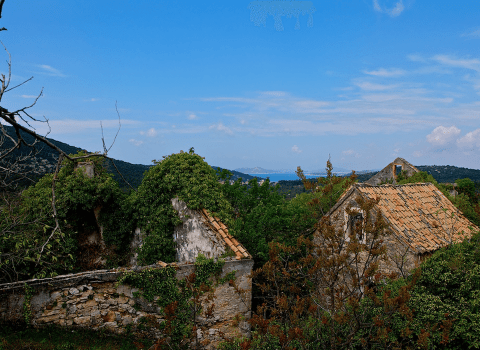 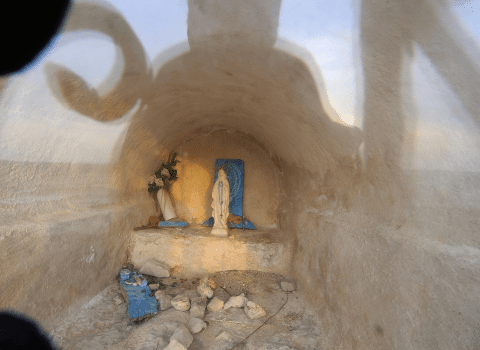 Zlarin abounds with rich historical, cultural and natural treasures, especially our churches with altars decorated with gold and red coral branches that sailors left as a sign of their commitment.

The story of today’s parish church dates back to the 14th ct. and the first record of a chapel erected on the foundations of the Late Antiquity temple. In the period from 1735 to 1740 it was demolished and rebuilt in baroque style based on the drawings of Domenico Focozzio – one of the greatest altar craftsmen in Italy – and it now has seven altars. In one of these altars the body of St. Fortunat, protector of the island and sailors, a Roman martyr is being kept. The body was brought by canon Stjepan Makale from Roman catacombs and sent by pope Pius VI. The Pope clothed him in a shinny suit, gave him a saber and a ring, and the story goes that he even kept the body of St. Fortunat in his own house for two years until a deal regarding the ownership was made with the church. Another particularity carried over through generations is the story of the fresh water well beneath the main altar that encloses the church in a repentant aura, almost as if you can feel the weight of a centuries-long island life. In any case, the fact is that there is a well in front of the church that is somehow being filled, and nobody knows how.

During the great plague of the 17th ct. everyone in Šibenik who had any connections to Zlarin fled here to save themselves. However, many had already been infected when they arrived and they died on the island, including the three brothers, Josip, Marko and Roko Bratić. In memory of his ancestors, Marko’s son and namesake had a small church built above their graves. Over time, the church got neglected and the roof caved in so the church got renovated in mid 20th ct. at the initiative of the then pastor. Bones of the deceased were relocated to a nearby cemetery and, according to the legend, the church had a wooden altar that was allegedly a masterpiece with a picture of St. Roko.

Throughout history, noble families often built churches or chapels next to their castles and that is how this small church with the altar of St. Simenon with the Christ child came to existence. A nearby castle, “palazzo,“ changed many owners and is now deteriorating; however, the small church is still preserved. A valuable numismatic collection, many historic figures’ autographs, works of art and jewelry donated by Jerko and Ana Vukov Colić are kept in it. 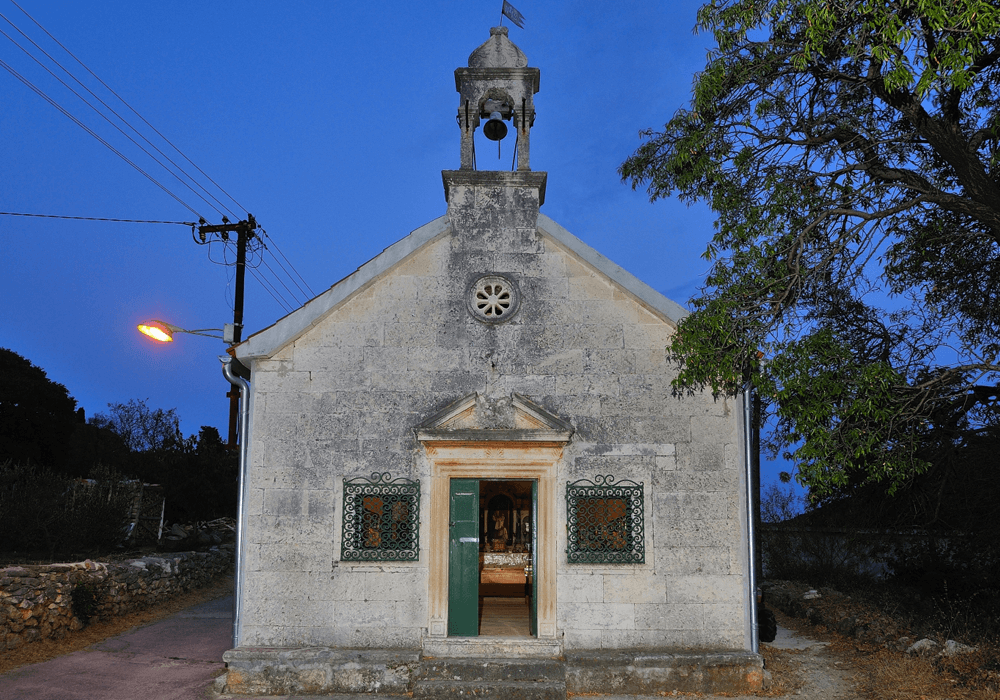 OUR LADY OF RAŠELJ CHURCH

If you decide to walk towards the fields at a crossroads you will see the oldest and most mysterious church on Zlarin, built in the first half of the 15th ct. According to a legend, a girl from Borovica village was going to Mass at dawn and saw a young woman in white on the mahaleb cherry tree who told her to tell the priest and villagers they should build a church on that spot. She told everyone in Zlarin what she saw, but no one believed her. The next day Mary, Mother of Jesus appeared in front of her and gave her her “pas“ (belt) with the inscription “Hail Mary“. The villagers then followed the girl and found a framed picture of Mary, Mother of Jesus on the tree. Having already started building the church twice in another spot and with the church constantly caving in, they decided to take the picture there. On that occasion, a solemn procession led by four girl dresses in white carrying the picture commenced. However, according to the legend, the sky was suddenly covered in clouds, heavy wind started blowing and it began to rain after a months-long drought. Allegedly, they tried to relocate the picture three times, but to no avail, until finally they gave up and built the church on the other spot. They named her Our Lady of Rašelj Church after a tree on which they found the picture and it is honored on 8 July, the day of the solemn procession. 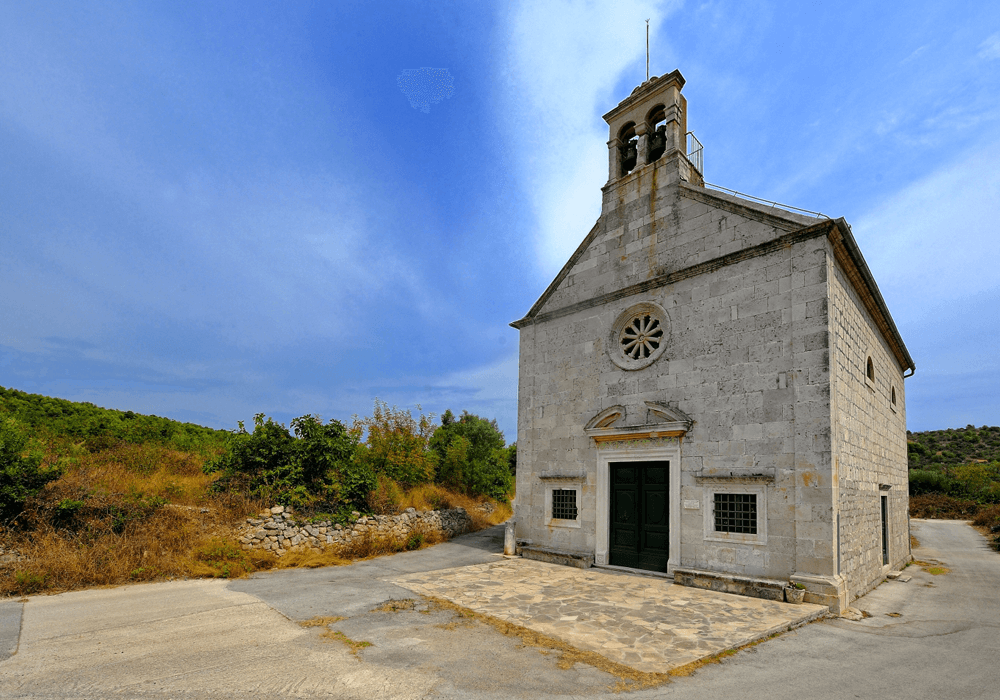 Another particularity surrounding this church is that soon after it was built Brotherhood of Our Lady of Rašelj Church was formed there. The Brotherhood had a book of regulations (matrikula) on humanitarian and social issues, written in Latin alphabet 36 years before the discovery of America (in čakavština dialect) and as such, represents the first written document of that kind.

The miraculous Lady of Rašelj wielded a huge influence on the people of Zlarin; farmers, fishermen, sailors, coral hunters, emigrants who declared their commitment to her and presented her with presents having gone through life difficulties and perils, as testified by numerous decorated candles, jewelry, corals, votive paintings and model ships of all kinds. 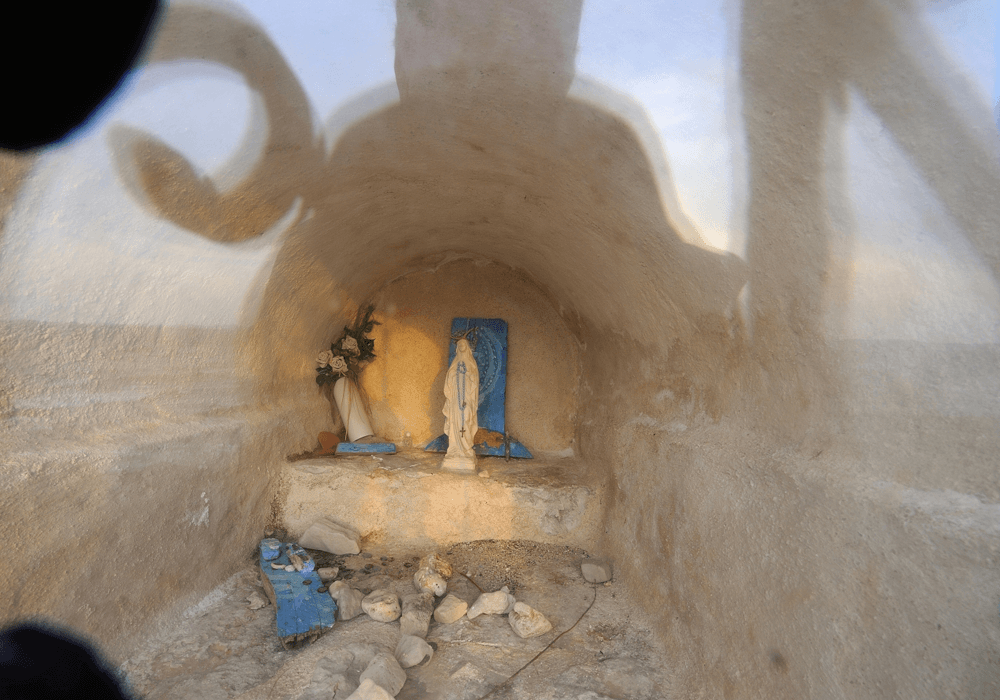 Dating back to the Middle Ages, Borovica was the first settlement on the island, located at the edge of the fields, near two springs and hidden behind the hill so as to avoid dangers coming from the sea – pirates and other ruffians. Today, the abandoned ruins tell the story of the islanders’ hard life as well as their many talents. They were known as skillful house, sty and drywall builders. Drywalls were built around the gardens and vineyards, and the islanders were also master builders of stone field houses – small houses in the fields used as tool storages and lodges. They were practicing fishery, salt collecting and selling, winemaking and farming. They used homemade wool to knit their clothes, they made kartils – baskets made of canes, fishing nylon strings from strands of horse tail as well as various tools in a blacksmith shop: mattocks, pickaxes and small pickaxes, axle pins, pitchforks and rakes. Borovica had its leader, and all the decision were made jointly – as was the custom in the whole of Dalmatia – at the main square, on a clearing that everywhere carried the name Rudina. 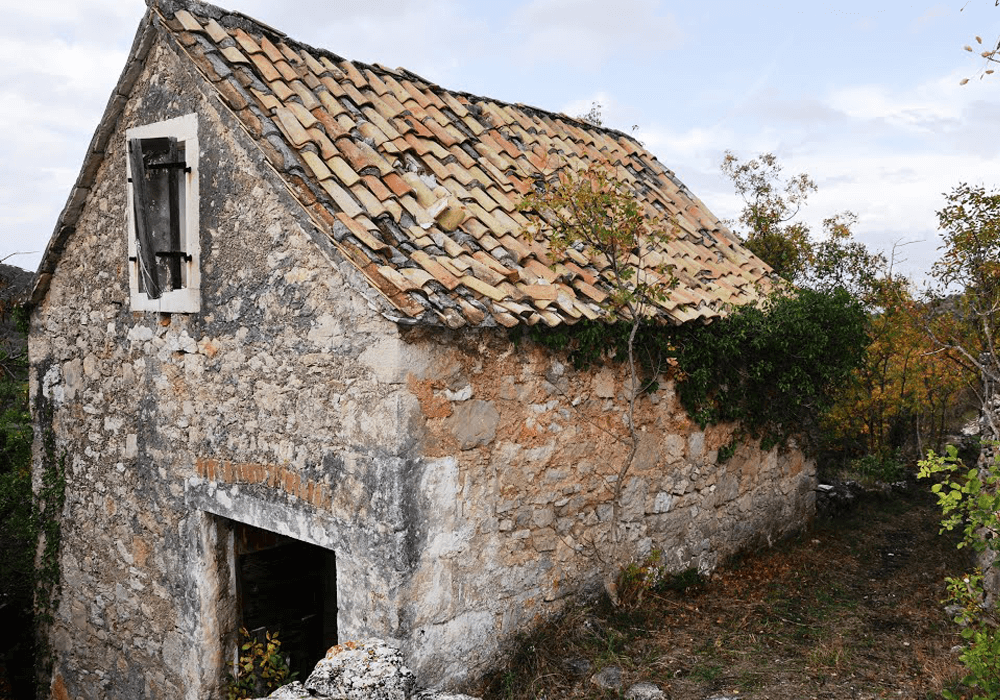 Due to their isolation, they kept their unique identity through traditions and customs, e.g. emigrants or sailors would wear a golden earring in case they died in a foreign land and had to pay their burial costs; their specialty, a small cooked octopus they offered on grapevine leaves in taverns.

At the beginning of Donja banda there is a place where underground water flows into the sea thus producing brackish water. The spring is surrounded by stone slabs and a small well. It was used for clothes washing which was a hard everyday work, especially considering that clothes were made of heavy wool and linen. Girls and women would gather there carrying the clothes in vats (maštels) on their heads, without holding on to the heavy load. Vrulja was the place of fun, songs, conversations, but also tears of true friendships since often times they only had one another, with their husbands being far away in foreign lands. With the arrival of the washing machine, the tradition of gathering and arduous washing has died out, and today you can see schools of small grey mullets in Vrulja. 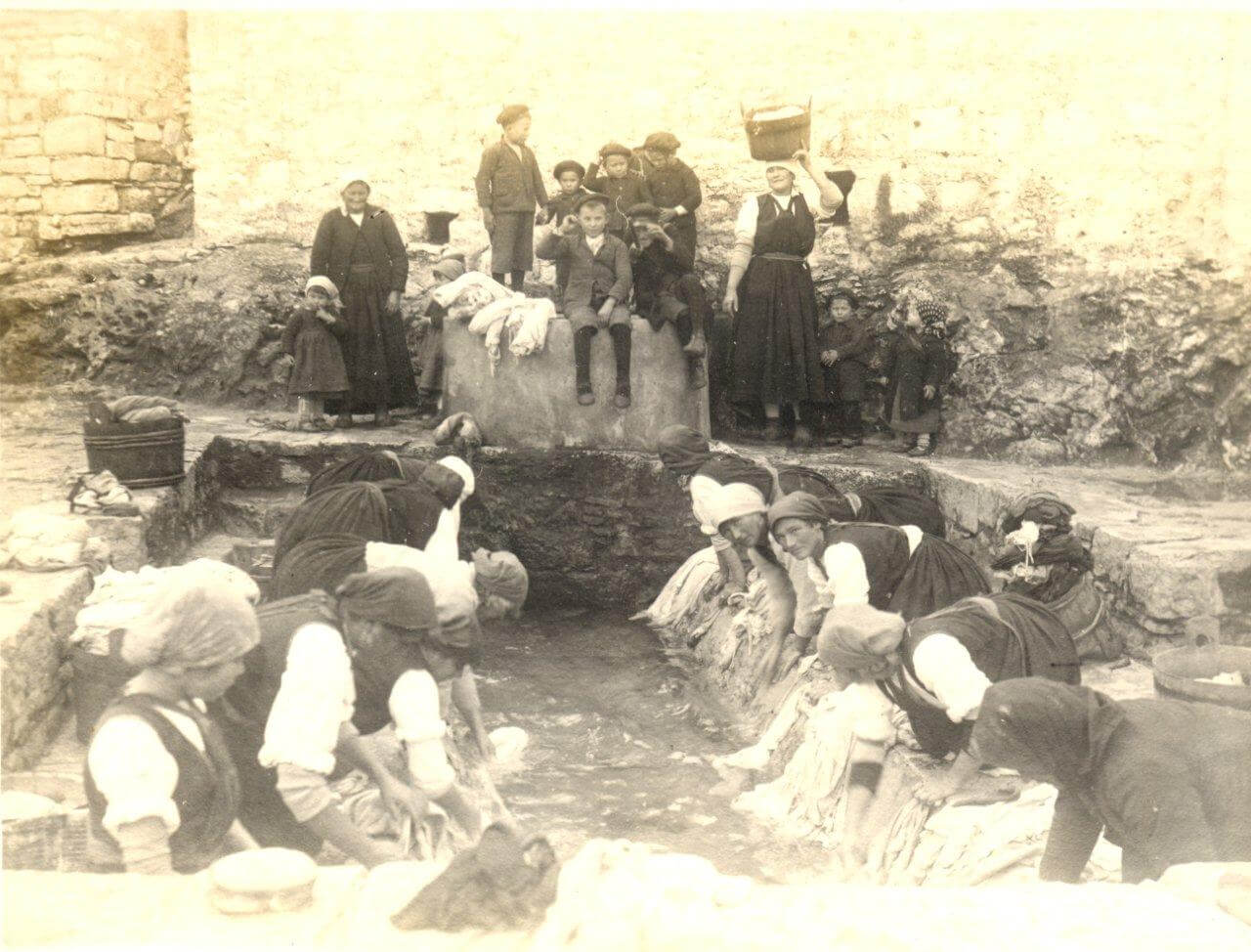 Building the most famous clock on the island has a little anecdote attached to it. The then “sindaco“ – mayor would often travel to Trieste, and out of all these progressive big city institutions he wanted to copy at least the public clock and build it on Zlarin. As soon as he arrived in Zlarin, he gathered the people and told them: “You don’t know what time you go to bed or what time you get up, nor what time you pray. We have no tower or a clock on it, unlike all those enlightened places. Shall we build it?“

People said yes, and everyone helped build the tower. That is the story of how Zlarinians got their Leroj (distorted version of Italian orologio) in 1839, the tower which remains island’s pride and joy and, of course, a tourist attraction. 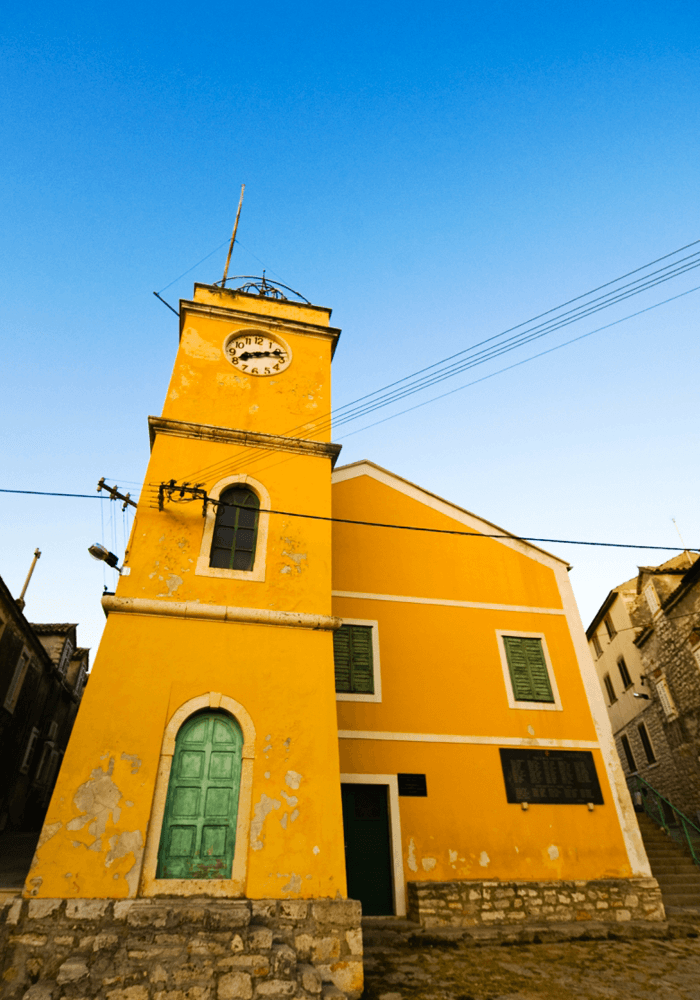