On the coral islet

We welcome you all”

Born on 26 January 1924 on Zlarin. In the registry of births, as well as in his certificate of nationality, the date 24 January is stated, but his mother told him she knew when she gave birth to him, and that the priest wrote down the wrong date. Mother knows best, and he took the date as his birth date, even though his documents state “the other one“. It appears that these contradictions are part of his life. Her wanted to become a sea captain, but since he was an only child his mother didn’t want to let him go to the “other side of the world“ to Bakar. He wanted to become a priest out of spite, but his father’s uncle told his mother that it would be wiser if he learned a trade. He became a journalist and writer. 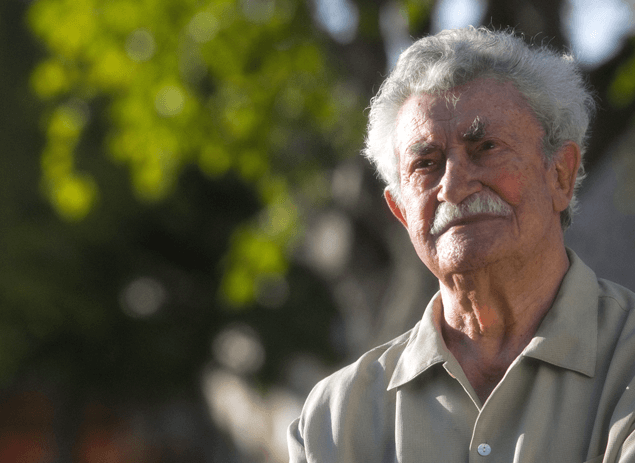 He was the editor of Pionir, he launched the first children’s newspaper in Croatia and then an entertaining youth weekly that, at that time, became the most sought-after youth and children’s weekly. In 1964 he received Journalists’ Association award “Otokar Keršovani” for series Mendin program, where he wrote screenplay for over eighty episodes. He created many shows and wrote screenplays and dramatizations, and at the same time he published twenty one books: poems for kids and adults, stories and novels – two of them in old Zlarin čakavski dialect. He wrote eight novels, mostly SF, together with his friend Zvonimir Furtinger.

He received many prestigious awards. Most significant one is the Life Achievement Andrija Maurović Award for his exceptional contribution to Croatian comic book. For children’s novel Opasno po život he received Ivana Brlić Mažuranić Award in 1994. At TV festival in Neum in 1990, in the category youth drama program, he received the award for screenplay together with Fanelli for directing the TV play Starci , based on Viktor Car Emin’s short story. He received numerous awards, but his favorite one is the Readers’ Delight Award.

He was the custodian of Zlarin’s zlarinske čakavski dialect and, from 2003 on, he maintained the school of čakavski dialect – “Neka zvoni ča”, which made sure that new, as well as older generations, know the true Zlarin dialect and that old Zlarin everyday words do not die out.

He died two days before his 93rd birthday, on 24 January 2017 in Šibenik, and he is buried on his beloved Zlarin.

Path of the past Vesna Parun’s path