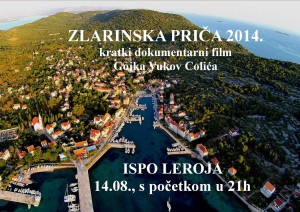 One of the most known Croatian photographers nowadays, and also from Zlarin, will present his documentary film “Zlarin story 2014.”, dedicated to this island. In this film, through stories told by Mladen Bjažić and Vladimir Buneta, the author is weaving a story about the past, the present and the future of Zlarin, and Spomenko Bagarić gives it all a comprehensive spiritual dimension, while the background is created by air-photos of the island from 0-300m height, thus giving many spectators a new perspective, a new dimension and a new view of Zlarin.