The old school is closed 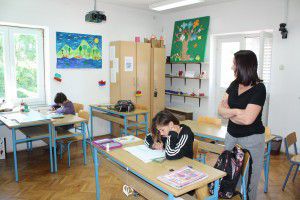 After 170 years of educating, having destroyed each and every illiterate person by teaching them how to read and write, the state school in Zlarin shut down, once a bright spot of enlightenment and progress. It’s not because of the building, it’s not because of the shortage of teachers, it’s not even because of someone, such as the village chief and the patrol chief, who were in 1846 accused of showing “a constant aversion to the existence of a school in Zlarin”, but simply because there are no children that could attend school on our beautiful and noble isle.

Maybe there would be children if they didn’t have to go to kindergarten, or to music school or to dance school, or to the playroom in Šibenik. Time takes its toll. From a town with 2000 inhabitants in the 19th century, we became a settlement with around 200 inhabitants. In 1845, except for the human inhabitants, there was also a horse, 200 donkeys, 600 sheep and 20 pigs. Now we don’t have a single jackass or any livestock, except for Joško’s two sheep.

We’ve lost the status of a municipality, our port captaincy, our customs office, our military base, our financial station, our naval sanitary office, even our fishmonger’s shop, and now our school, which had been educating us for 170 years. Even in times when there was no school on Zlarin, we were literate and proud of having written the Parish Register of the Confraternity of Our Lady of Rašelje, which contained a unique set of rules for the proper conduct of friars and for helping the ones in need, written in the ancient Zlarin Croatian dialect, in the Middle Ages, under Venetian rule, in 1456. All that is nice, but the school is a symbol of life. 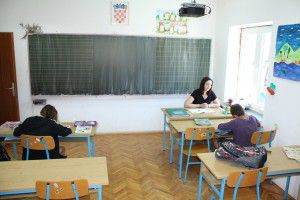 We’ve been moving out of the island for centuries, the most over the last 60 years. We’ve been moving to Šibenik, Split, Rijeka, Zagreb and all the countries of the world, for it is unfortunately impossible to live off the sea and a little poor soil. No one has ever, except for Jerko Alfier’s former carpenter’s shop and electric central, invested a single penny in the development of the island. Where there’s no job, there’s no life, and there can’t be any children where people don’t live. We expected something from those who had been promising a lot, but didn’t do anything to help the development of the island and to help ensure places to live, on the island whose guests call it a paradise when they come for the first time, and they return to it, even though it deteriorates year after year, despite all the new buildings of the new people who admire its green beauty, clean sea, peace and the most beautiful sunset.

The last students, two members of the Celić family (and if it weren’t for them the school wouldn’t even have lasted as long) have enrolled in fifth grade in Šibenik, and their diligent teacher, who would come to school every day because of five, four, three, sometimes even two students and prepare them for life, has gone with them. Dear teacher, Marijana Rajčić, we envy your new pupils in Šibenik, eagerly expecting your return.

FROM THE HISTORY OF THE SCHOOL IN ZLARIN 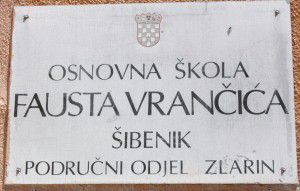 In the year 1909, the state school in Zlarin had two teachers. The seamen of Zlarin were sought-after everywhere, but they couldn’t get the necessary qualifications because they had no money to live in towns where there were maritime schools. The founding of an “internship course of a nautical school” in Zlarin was proposed. The Provincial Assembly of the Kingdom of Dalmatia approved of the proposal and proposed to the Provincial School Council to organize the course in Zlarin, “deeming the locality quite apt for such a school.”

In his History of Zlarin, Bernard Stulli quotes that these reasons weren’t paramount to the Austrian rulers, who ignored this request from Zlarin because of a general indifference towards the Dalmatian economy. Instead of the approval of the naval course, the Zlarin municipality received on June 24, 1909, a notification that the tsar and king from Vienna had approved that the new pier that was under construction in Zlarin be “to the memory of the majestic 60 year anniversary of reigning” named after His Majesty.u

Now, not quoting Stulli anymore, I must say that the never finished palace in Trebarićeva Street, which was being built by the Alfier brothers for the purpose of the naval course and the future maritime school, has ever so majestic remained as an everlasting monument to all authorities’ unconcern for Zlarin.

We, the people of Zlarin, even today call it a factory, as we do all ruins of houses without roofs. The failed course and the basis for a middle school was preceded by the opening of a state school in 1843. Before that, the first people who taught children and the common folk how to read and write were our Glagolitic priests.